With over 60000 Lenovo ThinkPad X130e units set to be deployed across New South Wales schools in 2012, we thought we would take a look at this new notebook and see what students have to look forward to (or dread).

The ThinkPad X130e weighs 1.75kg and has an 11.6in screen. It has been designed in conjunction with the New South Wales Department of Education in order to meet the needs of students as they see it. The criteria for the design included some ruggedness, adequate connectivity features and good performance. Considering the previous roll-out to students included Lenovo netbooks that could barely run many intended applications, the last point is key. Lenovo will offer the X130e with either an Intel Core i3 CPU or a Celeron CPU. Even with the Celeron CPU, performance will be at least three times better than a netbook; of course, the Core i3 will be optimal.

We looked at the Celeron 857 version of the X130e and found it to supply adequate power for basic office applications, Web browsing and image editing, but it’s a dual-core, 1.2GHz processor that will struggle if more demanding tasks are required. It’s not great for editing photos with lots of effects and filters, nor can it be used efficiently for media encoding and video editing. In addition to the Celeron 857 CPU, the notebook has 2GB of RAM, integrated Intel HD graphics and a 320GB, 5400rpm hard drive. 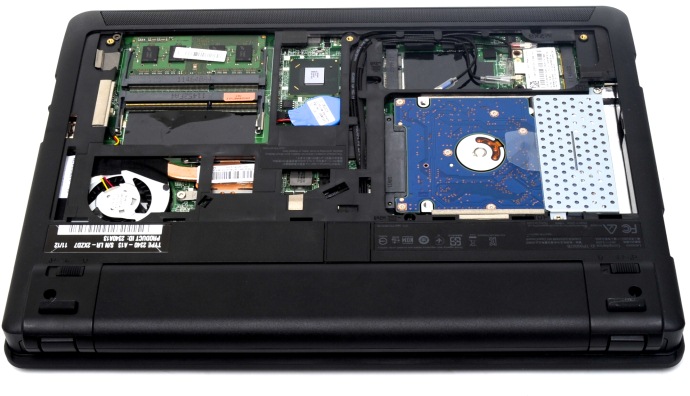 With the cover off, you can see unit has two memory slots, as well as a PCI Express slot and extra antenna wires.

So as far as performance is concerned, office applications will run just fine, Web browsing will be swift for the most part and multitasking will be adequate thanks to the two cores. However, the notebook did sometimes feel sluggish when loading applications and the toolbox utility that’s provided, and we can attribute some blame here to the hard disk performance; it recorded a slow transfer rate of 22.08 megabytes per second (MBps) in our file copying tests, while also recording a relatively slow read and write of 71MBps in CrystalDiskMark.

Graphics are handled by an integrated Intel HD adapter and the notebook’s score of 2444 in 3DMark06 shows that students will be frustrated if they try to run any games on it. This adapter drives the 11.6in screen, which has a native resolution of 1366×768. It’s a matte screen that’s viewable in bright environments without reflections posing too many problems and its contrast and colour reproduction is decent for displaying and editing photos. The screen has many brightness levels to choose from and can be dimmed almost down to black.

Battery life can be prolonged by using these low brightness levels, to the point where Lenovo claims an entire school day’s worth of life. For our tests, we use maximum brightness, enable Wi-Fi, disable power management and loop an Xvid-encoded video. The 5.16 amp-hour battery lasted 4hr 32min in this test, which is quite a good result for a small laptop with decent processing power.

The battery is removable and a SIM slot can be accessed once it’s removed, though there was no 3G modem in our test model to work with this. Wireless networking is facilitated by a Broadcom adapter that supports both 2.4GHz and 5GHz frequencies. 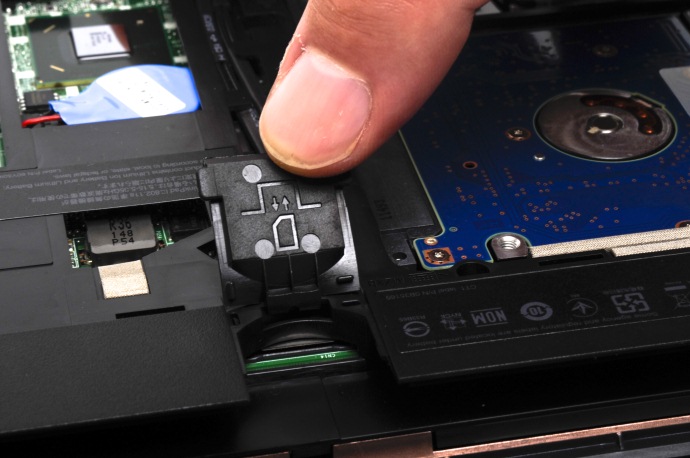 This SIM slot on our unit was not enabled.

Physically, the laptop looks much like a typical ThinkPad, which we’re not sure kids will like, but it is available in different colours, which may help. It’s designed to military spec standards for durability and it feels quite tough. Lenovo says it has reinforced ports and a stronger bezel, hinges and corners than previous school laptops. There is a rubber, overlapping bumper around the screen, which helps protect the corners and edges from impact, but it also makes the latch-less screen a little hard to open. The lid itself feels very strong and it takes quite a bit of force before any puddling shows up on the screen. The hard drive is protected by a motion sensor that parks the heads whenever excessive movement is detected. Its action is evident while watching movies and then moving the laptop, which will cause the video to stutter. It’s set to high sensitivity by default, but it can be adjusted. 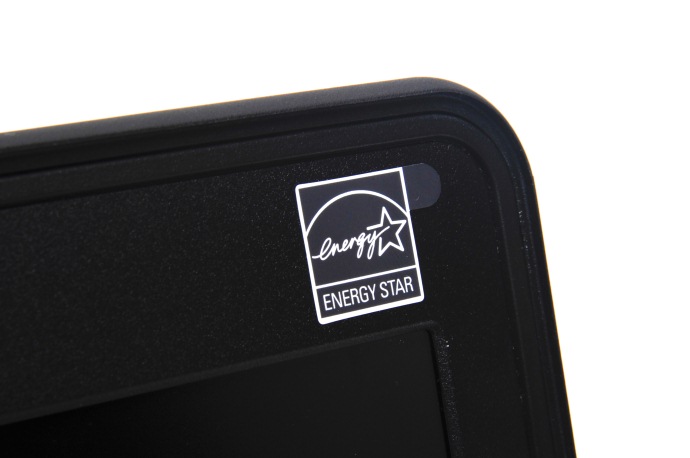 The rubber bumper can make the notebook a little hard to open.

We like the keyboard, which has chiclet-style keys that are 15mm wide and very soft to press. Lenovo says the keyboard has been designed with little hands in mind, making it perfect for children, but we didn’t have any problems typing on it either. We like the dedicated Print Screen key and the Page Up and Page Down keys above the arrow keys are convenient. The location of the Control and Function keys tripped us many times though as the Control key is not located in the very bottom-left corner, but one spot in from the Function key. These can be swapped around in the BIOS. The keyboard isn’t backlit, nor has Lenovo installed its famous screen-mounted keyboard light.

Lenovo has installed a dual pointing device that includes a touchpad and a TrackPoint. We like the feel and performance of the latter, which is great for when you’re using the notebook on your lap, but the touchpad was a little too jumpy during our tests. Tapping on the pad sometimes made the pointer move off its mark, which was very annoying and it sometimes caused unwanted actions to be performed. It’s also a very small pad (75x38mm) with an annoying, bumpy texture and its left- and right-click buttons are located under the pad. Sometimes we’d just use the soft left- and right-click buttons of the TrackPoint even while moving the cursor with the touchpad.

Around the edges of the laptop there are USB 2.0 ports (no USB 3.0), VGA, HDMI, Gigabit Ethernet and headset ports, as well as an SD card slot. There is a built-in webcam and microphone and a Kensington cable lock facility. The BIOS has provision for security tracking in case of theft.

The ThinkPad X130e feels sturdy and is comfortable to type on, despite being a little laptop, and it ships with a tiny power adapter, which puts the overall weight of the package at a smidgin over 2kg. It has a decent screen and battery life and its base doesn’t get overly warm after prolonged operation. We’re not fans of its touchpad, but it comes with a TrackPoint as well, which we used a lot of the time. At $673 for the Celeron version, it’s more expensive than a typical netbook, but it does provide more grunt. That said, for the price, we’d like to see 4GB of RAM and the Core i3 as standard. The kids would no doubt want to see an iPad.