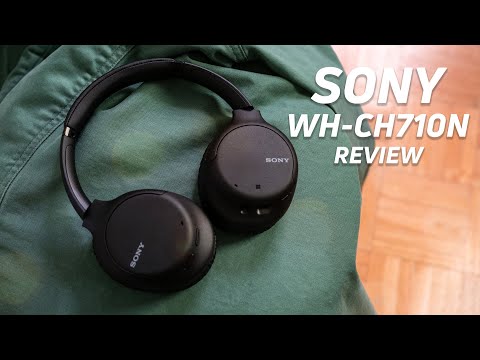 When it comes to active noise cancelling the brand to beat used to be Bose, but in the last few years Sony has really stepped in and taken over. Headphones like the WH-1000XM4 headphones are one of the best options you can get, but they aren’t cheap. If you don’t want to spend that kind of money but still want active noise cancelling headphones then you might want to check out the Sony WH-CH710N. At $198 USD these are significantly less expensive but what are you giving up for that lower price point 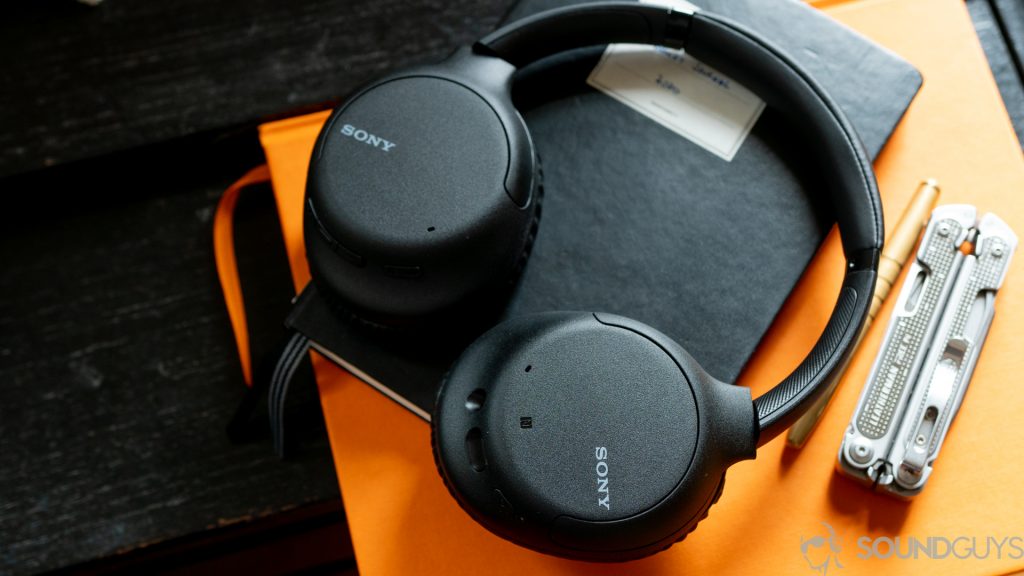 The Sony WH-CH710N are light and minimal looking.

The first thing you’ll notice when you take these out of the box is just how light they are. At 218 grams they don’t weigh much at all, and you don’t feel like you’re wearing a giant gadget on your head when you put them on. That’s because these are made entirely of plastic and… not the less expensive kind. What I mean is: the build materials here aren’t premium by any stretch. This is the first and obvious part of the headphones that took a hit in order to get the price down.

There’s a lot of creaks and squeaks here and while the earcups do swivel 90 degrees to lie flat, there’s no hinges. So if you’re trying to save space in your bag you’re out of luck here. The plastic also has a habit of amplifying sounds. So if you happen to accidentally bang into something or even just lightly scratch the side of the headphones, you’ll hear it immediately. 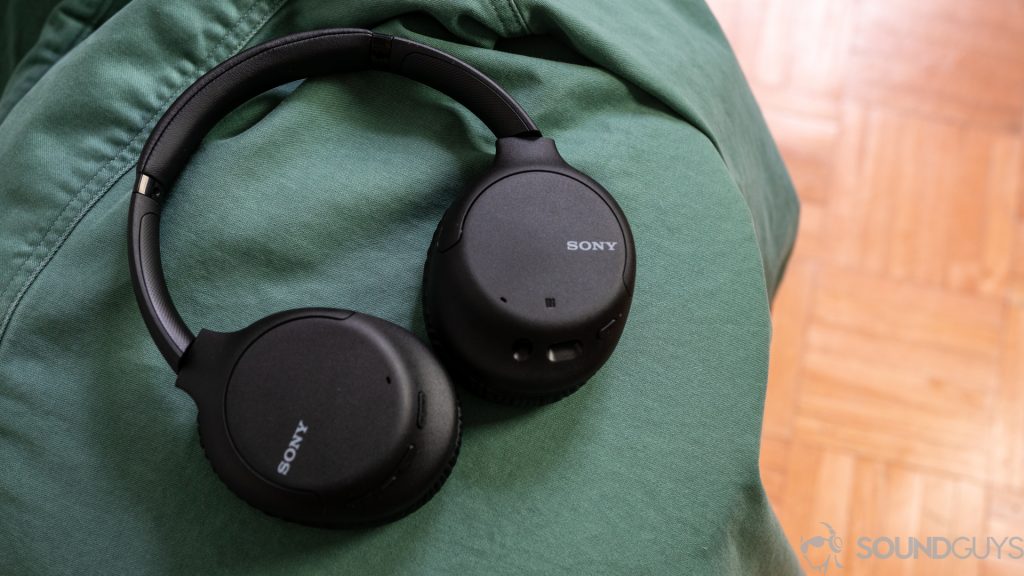 The overall design of the headphones is subtle and I like it, even if the build quality isn’t great overall.

The Sony WH-CH710N also aren’t the sleekest-looking headphones around (I still give that award to the Bose Noise Cancelling Headphones 700), but the WH-CH710N aren’t bad looking either. They have a rounded design that doesn’t attract too much attention—right up my alley, even if I don’t particularly enjoy the silhouette of the headphones. Okay, you get the point: these aren’t lookers. That’s fine though, because these are really comfortable, and how they are when you’re wearing them is really what matters isn’t it? The earcups are covered in plush memory foam padding that I found super comfortable even after three or four hours of constant use. The padding is also on the headband and doesn’t give me that pinch at the crown of my head that so many other products do. 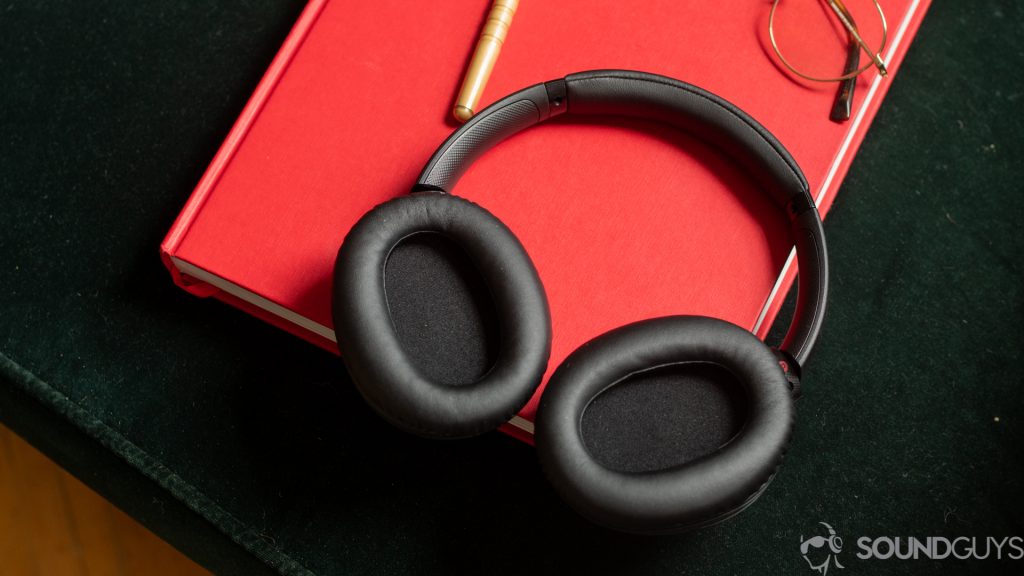 The headband doesn’t fold down due to the lack of hinges, but the earcups do rotate 90 degrees to lie flat.

The padding doesn’t feel or look premium to the touch but they do their job when you put the headphones on, which is to make the headphones as light as possible. My only issue here is that I don’t feel like the earcups are deep enough and if you have big ears (like myself) I can actually feel the drivers pressed up against my ear and after a few hours of listening that’s the only part that became uncomfortable. Unlike the Sony WH-1000XM3 there is no touch-sensitive earcup here for playback, instead you’ll get good ‘ol fashioned buttons. They’re super clicky and provide good feedback so you’ll always know when you clicked a button.

How do you connect to the Sony WH-CH710N?

You can pair to the Sony WH-CH710N headphones in two ways. First you can just hold down the power button for a few seconds after turning them on. From there the headphones will enter pairing mode and you can just find the device in Bluetooth settings of your source device. The second way is via NFC, so if you have an Android phone you can just hold it up to the NFC logo on the left earbud and a little pop-up will come up on your phone asking if you want to pair to them. 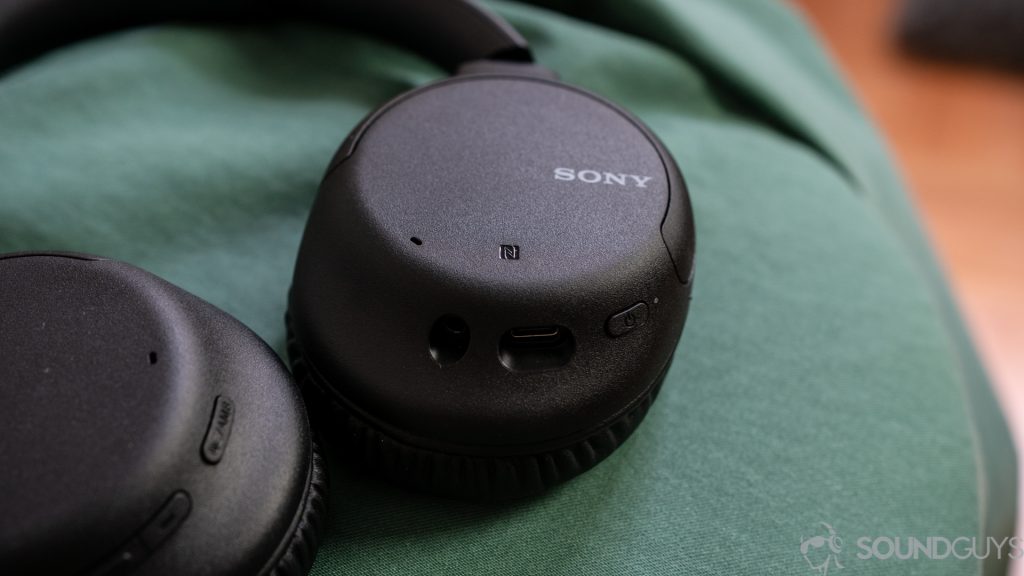 Pairing to the headphones can be done just by tapping an Android phone to the NFC logo. Otherwise, just finding the device in Bluetooth settings works as well.

The headphones are rocking Bluetooth 5.0 and only features the AAC Bluetooth codec which is surprising considering that LDAC is custom-made by Sony. Why it isn’t included here is beyond me but if you were hoping for higher quality sound you’re not going to get it here, at least not wirelessly. Thankfully, you can still always just plug in the included 3.5mm audio cable into the input on the bottom of the left earcup. Connection strength was also pretty solid and in my testing I didn’t have any issues within the 30 foot range. There was also no audio sync issues when watching YouTube which is good if you spend a lot of your time watching videos. 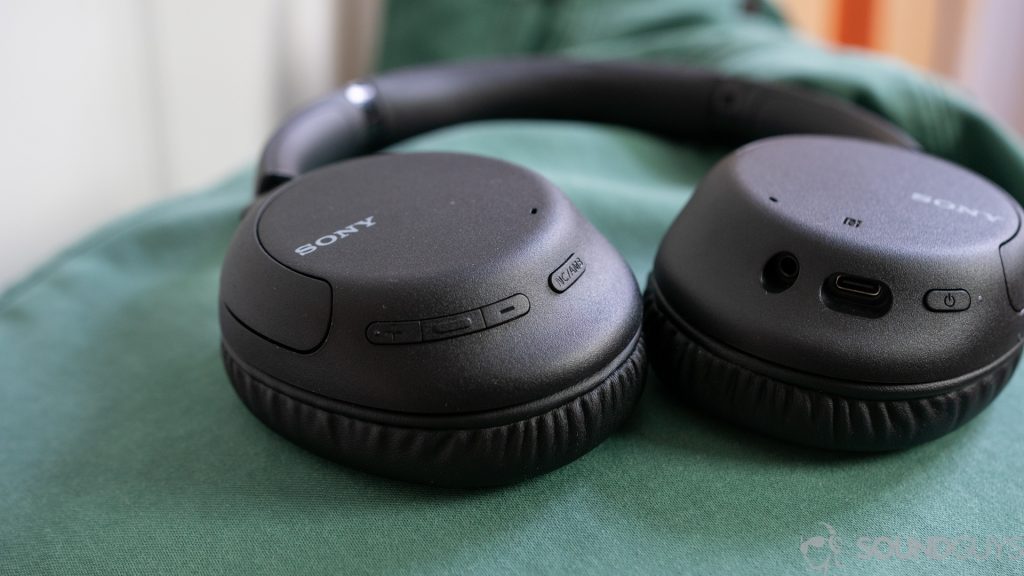 The playback controls on the bottom of the right earcup make controlling your music easy.

Playback controls are all on the right earcup and they work as you’d expect. There are three buttons and the middle one acts as a multifunction that will pause/play music, answer and end phone calls, and also access your phones assistant if you hold it down.

On either side are the volume buttons and then there is a fourth button that lets you toggle between the active noise cancelling feature or the ambient mode. This uses the onboard microphones to let you hear what’s going on in your environment. It’s basically the opposite of noise cancelling and can be super useful when you’re on a plane or train and want to hear any announcements. The only issue I have here is that when you click the button you’ll get a little voice that says “Ambient sound” which is… debatably helpful.

How’s the battery life of the Sony WH-CH710N? 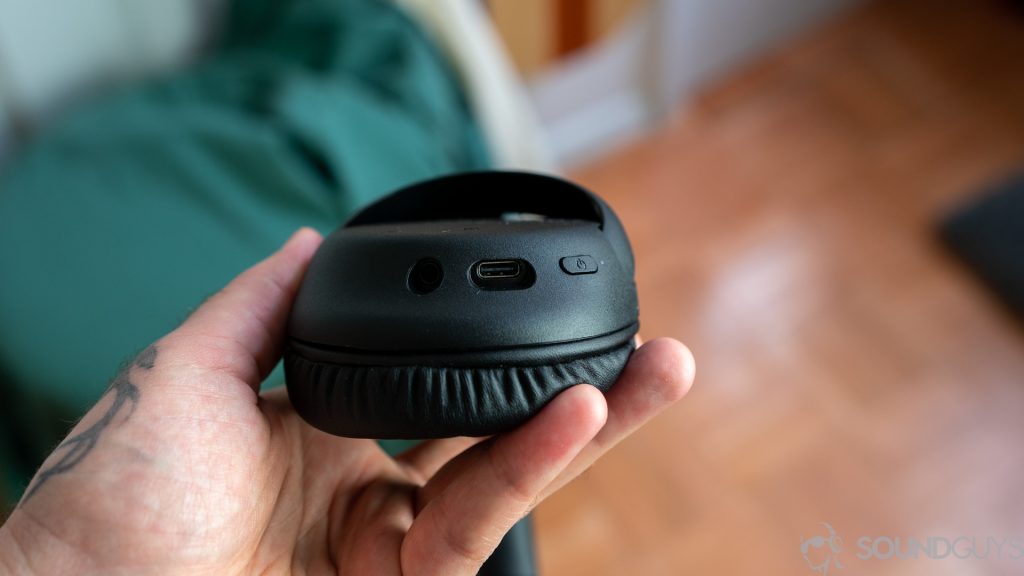 On the left earcup you’ll get a USB-C input, 3.5mm input, and the noise cancelling toggle.

The battery life here is great. Sony headphones aren’t known for skimping on battery and these are no exception. The company claims that you can get 35 hours of constant playback. In our battery test I had these on a output of 75dB with active noise cancelling turned on and managed to squeeze out 41 hours and 35 minutes of constant playback which is more than the company even claims on the packaging. Beyond that, these also have quick charging. So if you forget to charge Sony WH-CH710N up before heading out the door, just ten minutes on the charger will give you a solid 60 minutes of playback.

Is the Sony WH-CH710N noise cancelling any good? 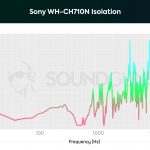 The Sony WH-CH710N do a solid job attenuating noise that most people should be fine with while commuting or traveling. 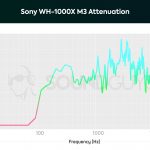 The Sony WH-1000XM3 noise cancelling does a great job of quieting general ambient noise like chatter.

I haven’t been able to jump on a plane or go on the subway with these just yet due to quarantine but I don’t see these having issues with the low rumbles that so frequently cut through most other headphones. While these aren’t as great at cancelling out sound as the Sony WH-1000XM3 or the newer WH-1000XM4 are, they’re pretty damn good considering these cost about $150 less at the time of this review.

How good is the Sony WH-CH710N’s microphone? 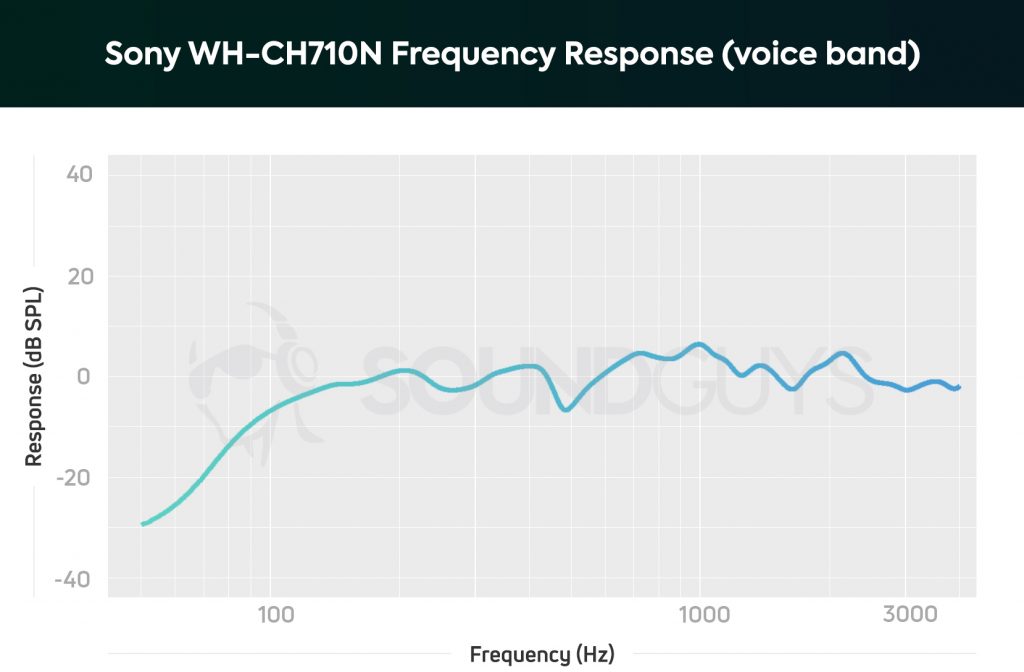 While the microphone is fine for phone calls and the like, we wouldn’t recommend them anything serious like a conference calls.

While the microphone is good enough for phone calls, it isn’t going to blow you away. The frequency response is pretty inoffensive, but because the Bluetooth connection is the way it is, the voice data sent back through your phone is pretty compressed. Here’s a sample so you can get a feel for how these sound in perfect conditions, and then how they sound with an air conditioner blowing in the background.